When we were exploring Uluru, we read several signs that provided some cultural and historical background about the Mala people who lived in the area. This story below was shared at the start of our walk, and periodically, we read signs that included a few more details of the story, while explaining details of the rock formations, such as the Men's cave, that had been carved out in the side.
__________________________

In the beginning, the Mala people came from the north and could see this rock. They thought it looked like a good place to stay a while and make inma (ceremony). The Mala men decorated and raised Ngaltawata, the ceremonial pole. The inma had now begun.

The Mala people began to busily prepare for their ceremonies. The women gathered and prepared food for everyone. They stored nyuma (seed cakes) in their caves. The men went out hunting. They made fires and fixed their tools and weapons.

In the middle of preparations, two Wintalka men approached from the west. They invited the Mala people to attend their inma. The Mala said no, explaining their ceremony had begun and could not be stopped.

The disappointed Wintalka men went back and told their people. Enraged, they created a spirit – a huge devil-dog called Kurpany to destroy the Mala inma.

As Kurpany traveled towards the Mala people he changed into many forms. He was mamu, a ghost. Luunpa the kingfisher woman was the first to spot him. She warned the Mala people but they didn’t listen.

Kurpany arrived and attached and killed some of the men. In great fear and confusion the remaining Mala people fled down into South Australia with Kurpany chasing them. The story continues down south.

These ancestors are still here today. Luunpa still keeps watch, but she is now a large rock. Kurpany’s footprints are imprinted into the rock heading towards the east and south. The men who were killed are still in their cave.

This story teaches that it is important to finish what you start and that you should watch for and listen to warnings of danger. 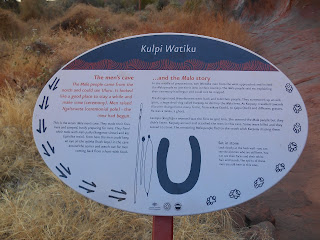 Posted by Michelle Szetela at 5:00 PM