We took an overnight ferry, The Spirit of Tasmania, from Melbourne last night, and disembarked by 7 a.m. this morning. This made for an early morning, so after we picked up our rental car, we stopped off for breakfast and made our way to Launceston. It was too early to check into our hotel, so we decided to visit Cataract Gorge.

Tasmania once had been ruptured by earthquakes. The South Esk River followed the depression formed at the time, and eroded the shattered rocks at the Gorge. The earliest recorded visit to this area was made by settler William Collins, an early-19th century English naval officer and an early settler in Tasmania, in 1804 when exploring the Port in the ship Lady Nelson. A private organization called The Launceston City and Suburbs Improvement Association, formed in December 1899, constructed an access along the Cataract Gorge, which took eight years to complete. In 1940, a suspension bridge was constructed across the South Esk River at the head of the First Basin to connect the two sides of the River area.

When we arrived at Cataract Gorge, we discovered we could take a scenic chairlift, which carried us over a quarter of a mile, high above the gorge. (The central span of 308 meters is believed to be the longest single chairlift span in the world.) We could look down over the gorge, the rocks, and some of the pathways. Once we landed, we set out across one of the walks that took us alongside Esk River. 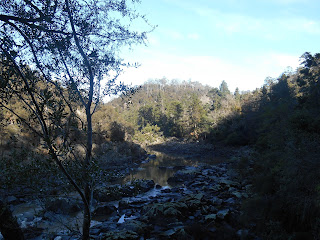 There were a lot of paths one could take, ranging from easy, flat paths to more strenuous hikes and jogs; small meadows and streams were located throughout the area. We also spotted a few peacocks hanging out, especially around the café. However, we were warned not to feed the peacocks, who seemed extremely relaxed having so many people around taking their picture. 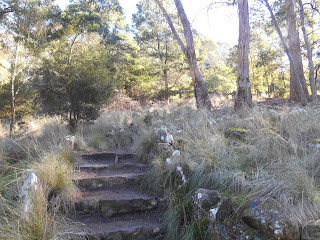 It was a gorgeous day, albeit a chilly one - the temperature was in the mid-50s - and it was easy enough to see that this is a place where we could easily spend all day; one of the employees mentioned how much changed throughout the seasons. After exploring a few of the paths, we decided to visit the Queen Victoria Museum, where we saw an excellent (if small) collection of dinosaur and other fossils, such as part of a tree more than 20 million years old (from the East Pinafore Mine, Lefroy, in northern Tasmania), and a stromatolite from the precambrian period.

Stromatolites are layered mounds, columns, and sheet-like sedimentary rocks. They were originally formed by the growth of layer upon layer of cyanobacteria, a single-celled photosynthesizing microbe that lives today in a wide range of environments ranging from the shallow shelf to lakes, rivers, and soil.


There was also an excellent exhibit on the Sydney Cove, Australia's oldest merchant shipwreck. Sydney Cove was the Bengal country ship Begum Shaw that new owners purchased in 1796 to carry goods to Sydney Cove, and renamed for her destination. She was wrecked in 1797 on Preservation Island off Tasmania while on her way from Calcutta to Port Jackson. She was among the first ships wrecked on the east coast of Australia.

Posted by Michelle Szetela at 3:11 AM