Today was our first full day in Australia. Yesterday we got in early, but after such a long day (a 2-hour flight, then a 13-hour layover, followed by a 17-hour flight), after checking in to our hotel, we took (very long) naps before getting our bearings and wandering around nearby Chinatown, where we had dinner. It had begun to rain (and then poured) by the time we had finished eating, so we came back to our hotel room and planned out the next several days that we'll be in Sydney.

Our plan had to been to start our day today by visiting the Anzac Memorial in Hyde Park, but the building was being renovated (renovations were apparently supposed to be completed in March, but the entire building was still completely covered), so we weren't able to go in, although we did see a statue of Captain Cook, as well as a munitions statue.


Instead, we wandered around Hyde Park, a 40-acre park which was beautifully maintained, and has nearly 600 trees. It was a good way to start our day, and we were happy to explore until the Australian Museum opened. We took in the Mammoth Exhibition, a special exhibition where we saw, among other specimens, a 42,000-year-old baby mammoth; we also saw the excellent First Australians Gallery, which included a selection of the Museum's 40,000-piece collection of Indigenous Australian tools, artworks, adornments and other cultural materials acquired from early European settlement to today.


We walked a few blocks to St. Mary's Cathedral, where we'd decided to attend Mass. The cathedral itself is a Gothic Revival. The first stage of the cathedral, the northern section, was built between1866 and 1900; the second stage, the southern section, was completed between 1912 and 1928.

We were early for Mass, so we visited the Crypt, the floor of which is inlaid with Celtic cross about 138 feet long by 69 feet wide. The floor is further adorned by five medallions depicting the days of Creation and on the stems and arms of the cross are 18 smaller medallions illustrating the titles given to Mary. 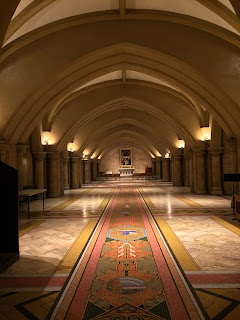 Our last stop of the day Hyde Park Barracks Museum. From its opening in 1819 until the late 20th century, the barracks provided accommodation for convicts, female immigrants, and aged and destitute women; it later housed courtrooms and government offices as a legal and administrative hub. The Barracks were commissioned by Governor Lachlan Macquarie and built with convict labour, and was the first convict barracks in Australia. Previously, convicts had been allowed to find their own accommodation, but by housing them in a barracks Macquarie hoped to "increase their productivity and improve their moral character." Over 100,000 people passed through the Barracks.

I was especially interested in learning that the Barracks was converted into Sydney’s Female Immigration Depot in 1848, temporarily housing about 40,000 women. Between 1848 and 1850, 4,114 orphan girls, some no more than 14 years old, were shipped on government-funded immigrant vessels from Ireland to Sydney, Port Phillip, Moreton Bay, and Adelaide.

Posted by Michelle Szetela at 1:48 AM