We had tried to visit St. Patrick's Cathedral yesterday, but it had closed after the 1 p.m. Mass, so we came back today and had a proper look inside before hitting the road for Canberra. 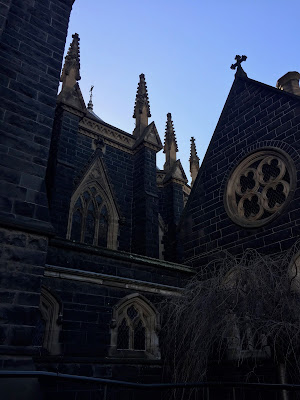 It is, of course, like so many other cathedrals, a beautiful church. I was half hoping to hear the bells ring (although no such luck), but did learn a lot about the history of the bells in particular and the church in general. The peel of eight bells were imported in 1853 from Dublin, were cast by Murphy's Bell Foundry, and are believed to be the only ring of eight bells cast by Murphy that are still in operation today. They were designated for St Francis’ Church in Lonsdale Street, but as there was no tower at this church they lay idle until 1868 when they were installed in the finished south tower of St. Patrick’s. The bells are dedicated to the Sacred Heart, the Most Pure Mother of God, the Immaculate Heart of Mary, St Joseph, St Francis Xavier, and All Saints. The bells are unique in that they were cast unturned and ring in an anti-clockwise direction. They're set in the key of F natural and the whole peel weights 3.5 ton.


In entering the Cathedral, the main altar is at the center, with seven chapels surrounding the sanctuary in a semicircle behind: chapels that feature altars dedicated to the Blessed Sacrament, Holy Souls, St. Joseph, the Ladye, St. Thomas Aquinas, St. Brigid, and the Sacred Heart. I said a particular prayer at the chapel of St. Brigid (today is my mother's birthday).


This chapel was originally called the Chapel of the Irish Saints but later became known as the Children’s Chapel dedicated to St Brigid. Children contributed to the cost of the chapel’s completion. On the archway over the chapel is inscribed a text from the 44th Psalm: ‘Omnis Gloria eius filiae regis ab intus’ (All the glory of the King’s daughter is within). The altar is constructed of alabaster, its frontal panel features small mosaics of St Patrick and St Columbanus. A marble statue of Saint Brigid is located in the niche of the reredos. Carved images of four Irish saints from the sixth and seventh centuries are also represented in the reredos – St Dympna, St Reyna, St Ita and St Bees (Bega). The stencilled motifs on the walls depict the clover leaf, an Irish symbol of the Blessed Trinity. On my way out, I paused to take a look at the Stations of the Cross, but I had also noticed an outside Station of the Cross.


Over a number of years Melbourne City Churches in Action (MCCIA) worked on a project to initiate an ecumenical walk through the Melbourne on Good Friday. The walk is marked by a series of 14 bronze sculptures which tell the story of the journey of Jesus from the Last Supper to the Cross. The 14 Stations are placed outside various city churches with two in the grounds of St Patrick's Cathedral.

And with that, we left Melbourne, and made our way to Canberra, the capital of Australia, in the Australian Capital Territory.
Posted by Michelle Szetela at 5:50 AM