`
Today Ed and I spent several hours exploring parts of Salt Lake City that we hadn't explored before. Our first stop was Salt Lake City Cemetery, the original cemetery developed by Brigham Young for the Salt Lake Valley. We specifically went in search of the grave of Lilly Gray, whose grave is engraved with inscription "Victim of the Beast 666." No one seems to know exactly what it means or why it was placed there; it's unclear as to why her husband had this marker made, although the husband sounds like a strange fellow. 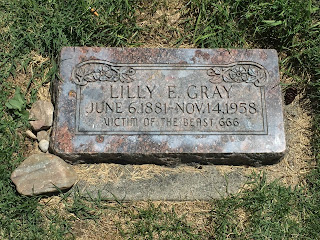 Our next stop was two miles west: a visit to the Anderson Tower Monument, which was built in 1884 by entrepreneur Robert Anderson, who modeled his a tower after the medieval towers of Scotland. Anderson wanted to create an attraction in which visitors could pay to go to the top of the tower and observe Salt Lake City. The tower was 54 feet high and 25 feet in diameter, and was built using granite mined from the same quarry that had previously supplied the nearby Mormon temple. Unfortunately, there was a flaw: Anderson built his tower atop the highest hill in the region, from the summit of which visitors already had an excellent view of the Salt Lake Valley. The lack of interest in would-be visitors caused Anderson to eventually board up the tower. Eventually the site was reopened, allowing visitors to climb to the top for free, but interest in the tower waned again and it was finally demolished in 1932. Today the only remnant of Anderson Tower is a low-lying monument that is built out of the destroyed tower’s own granite.

Our last stop of the day was a visit to the Pioneer Memorial Museum, which not only had we never visited before, but we hadn't even heard of it before. I came across a mention of the museum on Atlas Obscura, which is admittedly more than a bit dismissive in its description of the museum: it includes descriptions such as "bizarre" and an "enormous and well-organized basement." And I will say that the Pioneer Memorial Museum contains thousands, if not more, of artifacts once owned by Mormon settlers, many, if not most, of whom carted the entirety of their belongings across the country - sometimes emigrating from around the world - before settling in the Salt Lake Valley.

Collections were organized by type: musical instruments, clothing, dolls, furniture, farm equipment, linens and silks, household furniture, artwork, wagons, the list goes on. Everything was labeled and there were thousands of photographs and pictures of pioneers. The displays were overwhelming and impressive, and one got such an excellent sense of the difficulty in transporting one's entire existence by hand and cart.
Posted by Michelle Szetela at 10:58 PM