On our way to Bryce Canyon National Park, where we planned to admire views from various designated lookouts, we drove through Red Canyon, which is part of Dixie National Forest but which has similar geological features as those found throughout Bryce Canyon.

We wanted to see at least some of the views from Bryce Canyon, and it was recommended by our guidebook that we drive to the southernmost part of Bryce and work our way north, the reasoning being that the views would be on the righthand side of the road this way.

We started with the Rainbow and Yovimpa viewpoints, atop the Paunsaugunt Plateau which was once connected to the Aquarius Plateau, 30 miles across the valley. When the entire Rocky Mountain region began rising 16 million years ago, north-south faults split the vast tableland into seen separate plateaus. Though most uplift occurred in the distant past, recent seismograph readings indicate minute but ongoing activity. Here at the southern end of the Paunsaugunt Plateau is 9,105 feet above sea level, almost 2,000 feet lower than the Aquarius.


This is a view from Yovimpa Point, where one can get a look at the sequence of rock layers called the Grand Staircase. The sections or steps in the Grand Staircase are named for the dominant color of rock. You are standing on the top step known as the Pink Cliffs. Directly below you are the Grey Cliffs. As you look into the distance you can see Molly's Nipple, which is part of the White Cliffs. Looking down into distant canyons near the horizon, you can just make out some red rock underneath the White Cliffs. This red rock makes up the Vermilion Cliffs. Hidden from view but directly under the towering Vermilion Cliffs are the comparatively diminutive Chocolate Cliffs. The tree-covered hills that meet the horizon belong to the Kaibab Plateau — the North Rim of the Grand Canyon. 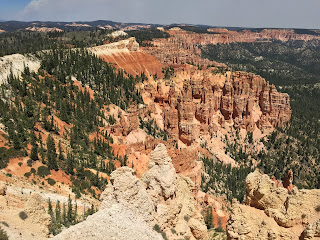 Our next stop Ponderosa Canyon (elevation: 8,904 feet), so named because of the huge Ponderosa Pines on the canyon floor. Some of these trees measure more than 5 feet in diameter and exceed heights of 150 feet It was here that we met with a very tame raven, who followed us around and, we think, wanted us to feed him.

We continued north, stopping off at Agua Canyon (elevation: 8,800 feet), where we saw some beautiful hoodoos. On the left, is the taller of the two towers, "The Hunter." To the right is a hoodoo commonly referred to as the "Rabbit" or alternatively the "Backpacker." In the early years of Bryce Canyon National Park an effort was made to name many of the more prominent hoodoos. Over the years many of these have fallen or partially fallen so that they look nothing like the things they were originally named for. As a result hoodoos are no longer being named and many of the more obscure names are being dropped from newer publications.

Our next stop was to admire Natural Bridge (elevation: 8,627 feet), one of several natural arches sculpted from some of the reddest rock of the Claron Formation (rich in iron oxide minerals), after which we took a look at Farview Point (elevation: 8,819 feet) and Swamp Canyon (the elevation of which was not posted).

Posted by Michelle Szetela at 7:00 PM