After lunch, we returned to the Bryce Canyon National Park Visitors Center to pick up tickets for an astronomy talk we planned on attending this evening. A couple rangers were outside the Visitors Center and had set up solar viewing stations; Ed and I were able to look through their telescopes to see the sun. At the moment, there's tremendous forest fire in the vicinity, which means that the sky has been covered with smoke going one direction or another for the past several days, so our solar viewing activity consisted of admiring a very red sun; we weren't able to see any sunspots or other solar prominences.

We went in search of the Black Birch Canyon viewpoint, only to find no signs for it, so we did some light exploring of the park instead. We'd passed one particular section that had been casualty of a fire at some point, so we pulled over. The air smelled of forest fire - doubtless the fire burning 35 miles east of us; currently, it's estimated that nearly 59 square miles (37,560 acres) have been destroyed - so it was eerie. 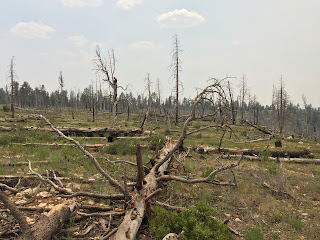 On a whim, we took a detour to see Paria View, which overlooks the Paria Canyons. These canyons are part of the Paria River's watershed; the canyons were carved by water runoff when this part of Utah was a wetter place, and flash floods can still occur here during thunderstorms. The Paiutes named this "Paria," which means "water with elk" or "water with mud." This region is famous for its slot canyons. These slot canyons were carved by rapid rates of runoff during spring thaws in the Ice Age. Even in today's drier climate, erosion continues to occur during flash floods. As a result, hikers are urged to stay out of the Paria Canyons during thunderstorms. This river's watershed is so immense that a moderate rain can create catastrophic flooding downstream.


Not far away was Bryce Point, our last stop before heading back to our hotel for a rest. This was named for Ebenezer Bryce, a shipbuilder who journeyed west with Brigham Young and the Mormon pioneers to assist in the construction of buildings essential to community life throughout the new land, settled in the valley just below the canyon in 1870. Bryce lived here for only five years, but in that time he constructed roads to facilitate lumber transport and surveying the route for a 10-mile irrigation ditch from the top of the plateau to the valley that would later lead to larger, more permanent settlements. All he is known to have said concerning this scene behind his home is, "It's a hell of a place to lose a cow."

This evening, to wrap up the Astronomy Festival, we attended a talk called "Humans on Mars?" given by Paul Ricketts, who does public outreach for the University of Utah Department of Physics. Unfortunately, his was not a good talk; Ed and I left after half an hour. Mr. Ricketts relied heavily on a PowerPoint that used graphics and design choices that were very outdated and was not especially professional (talking points that were in the form of bullet points; graphics and pictures that covered up text; including a poor quality clip of Apollo 13, which he then proceeded to speak over while it was still playing). His tone was similar to one that might be used for a younger audience, instead of a mixed-age group of those self-selected and interested in the subject matter, yet the information he included presumed a level of knowledge that not everyone would have. In other words, the way in which he presented information was fluctuated, and he relied too much on open-ended rhetorical questions to make his point. I admit I'm not especially interested in colonizing Mars; as a topic it doesn't interest me in the slightest, but I would have been interested in a more methodical and evenly presented talk that included explanations of the differences between Martian and Earth atmospheric and living conditions, as well as the difficulties that would come from traveling to and living  on Mars.

Just because someone is a teacher does not make one good at public speaking - although according to Mr. Ricketts' bio page on the University of Utah site, it did not look like he has much experience teaching - but Ed and I left feeling that it would have been much more interesting had we attended the "Star Stories" talk given by the planetarium educator.
Posted by Michelle Szetela at 10:27 PM