Utah: This is the Place Heritage Park

A few weeks ago, I discovered that a Christkindlmarkt is held at This is the Place Heritage Park. I've lived in the area since September 2010, and this was the first I'd heard of a German Christmas Market in Salt Lake City, and this was only my second visit to This is the Place Heritage Park. (The location of the park is where, on July 24, 1847, Brigham Young first saw the Salt Lake Valley. July 24th is now locally celebrated as Pioneer Day.) I only went to the Park for the first time three weeks ago when a colleague had his wedding reception at the park, and invited my husband and I to attend. Since this was an evening reception, we didn't see much of the park itself, so we took the opportunity to explore the park itself as well as do some shopping.

The Christmas Market itself was quite a lot of fun, although it was cold: snow on the ground, gray skies, and temperatures that couldn't have been higher than 35 degrees. I didn't get any good pictures of the Market itself, but we did explore some of the buildings, which really showcased early Mormon history and some of the early LDS settlers, and I got some pictures. And we had some very good lunch at Siegfried's Delicatessen.

The first building we happened to wander into was a replica of the 1865 Heber East Ward School. The original building was built of sandstone from the mountains near Heber City, Utah, and was used for school and church meetings. In 1890, the Utah Free School Law was established, but before 1890, teachers received their salary as a result of students' tuition. Money being scarce, teachers were often paid in lumber, produce, and other goods; sometimes the parents even boarded the teacher as a means of tuition  payment. You can see a picture of Brigham Young to the right of the chalkboard; to the left of the window is the Deseret alphabet. 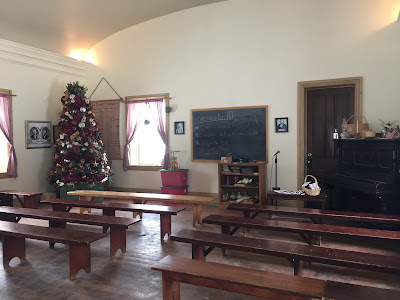 The Deseret alphabet was developed and taught starting in 1854; it has a letter for every sound o the English language. Due to the costs to the adopt it and other obstacles, it was abandoned in the 1870s. 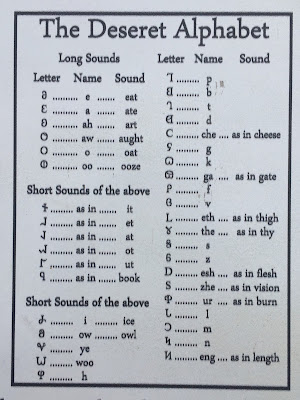 Lucy Loomis Tuttle, the third wife of Milo Andrus, directed the construction of this home while her husband was serving an LDS mission in England. The Andrus home served as an inn where Lucy, along with the rest of her family, provided food and lodging for travelers. It was known as a "Halfway House" because its location in Crescent, was midway between Traveler's Rest near 6400 South in Salt Lake City, and Porter Rockwell's rest stop about twelve miles south. Lucy operated the inn for seven years before moving the family to Spanish Fork and opening up another successful hotel. This house was constructed using balloon framing, which consisted of using a lighter frame of two-by-fours and nails that allowed for the rapid production of homes. This was the original house, built in Crescent, Utah, in 1858; it was relocated in 1980. 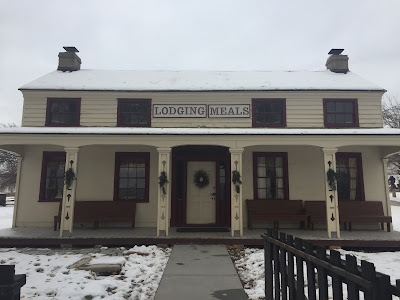 Posted by Michelle Szetela at 10:00 PM