Today Ed and I took a short drive up to the Belleek Visitors' Centre, where we were able to go on a Pottery Tour. I've been on this tour before, but not for several years, so it was interesting to learn again how the the china and pottery are made. We had lunch first, but on the tour itself we met several of the artists, including one artist who was making bowls with the Claddagh design. We also met an artist who was painting some of the pottery, and another who was painting the trademark on the bottom.

We were also able to see nearly all the pottery and china being created in various stages. These St. Brigid's crosses were in the earlier stages of creation, before they've been dipped.


The basket and flower-making station is one of my favorites; the baskets are hand-woven, and there are several sizes of flowers made.


We made quite a few purchases at the gift shop, all of which could be shipped directly from the factory itself. I did buy a tea cosy, an apron, and a postcard with all the Belleek trademarks (these are small enough items that I can transport myself) 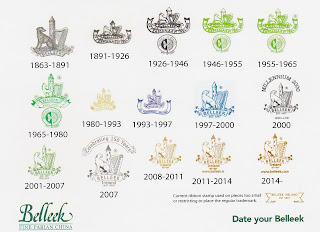 Because today also happens to be my mother's birthday, we had a very good dinner out at Victoria Hall, a Thai-Irish restaurant.
Posted by Michelle Szetela at 1:26 PM